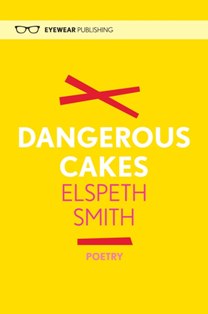 Elspeth Smith had her pamphlet Wishbone published by Smith/Doorstop in 2007and co-founded Midday Poets in Huddersfield. The only other information I could find is that she was born in 1928 in India. Her face regards the reader with a stalwart indifference from the jacket of her debut collection which is elegantly produced by Eyewear Publishing. Rather like her circumstances and her poetic history, the poems in Dangerous Cakes are elusive and mysterious.Take, for example, ‘Allowed Up’ :

Smith’s world is timeless yet also old-fashioned, and charged with atmosphere: it’s as if something terrible has just happened or is about to happen ‘off-stage’: in this world, everyday domestic objects such as a wine glass or a christening spoon take on ominous resonances and other people remain faceless, nameless. The voice is abrasive but so softly-spoken you hardly feel the rub until too late. Because they are so short and so laconic, some of the poems tread a fine line between understated control and a prosaic flatness of tone but most of the collection carries the risk well. And the collection as a whole has a satisfying shape.

Elspeth Smith’s voice is strange: a little Stevie Smith, a little surreal: yet hers is a very individual English tone, slyly humorous, eccentric and uncompromising. Dangerous Cakes is a fine title – and she is excellent at all her titles – well worth dipping into. It’s bracing as cool British seawater.