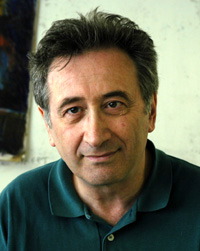 George Szirtes was born in Hungary and emigrated to England with his parents—survivors of concentration and labor camps—after the 1956 Budapest uprising.

Szirtes studied painting at Harrow School of Art and Leeds College of Art and Design. At Leeds he studied with Martin Bell, who encouraged Szirtes as he began to develop his poetic themes: an engaging mix of British individualism and European fluency in myth, fairy tale, and legend. Szirtes’s attention to shape and sound, cultivated through his background in visual art and his bilingual upbringing, quickly led to his successful embrace of formal verse. In an essay in Poetry magazine defending form, Szirtes argues that “rhyme can be unexpected salvation, the paper nurse that somehow, against all the odds, helps us stick the world together while all the time drawing attention to its own fabricated nature.”

His first book, The Slant Door (1979), won the Faber Memorial Prize. Bridge Passages (1991) was shortlisted for the Whitbread Poetry Prize. Reel (2004) won the T.S. Eliot Prize, and his New and Collected Poems was published by Bloodaxe in 2008.

Interview carried out by email by Jack Little in September 2012. Published in Issue 23.

Do you consider yourself as a poet in exile? What does nationality mean to your sense of identity?

I don't have quite such a clear idea of myself. I am aware of having been born elsewhere, of leaving the place, arriving in England, and of being a refugee, but I am unsure whether that constitutes exile. Exile is a romantic term. We weren't ordered out and there is nothing to stop me going back. I have grown into the English language to the extent that I feel I am inside it but I don't exactly own it. I can't tell you how much I love it. It seems to correspond to all I feel - in fact it probably produces a great deal of what I feel. It is remarkably generative for me. And yet there is also a bedrock of Hungarian that I sense now and then like a floor beneath a floor. Maybe, in some way, I am exiled from that, it's just that I don't experience the sadness of exile in the way that those who were older than me when leaving do feel and occasionally articulate. However, see the answer to the Budapest question as to what the Hungarian background signifies.

In so far as it involves pomp, bravado, xenophobia, aggression, or smugness, I don't care for nationalism. I do, however, understand the sense of loyalty both to people and to the places where they live. I think it is inevitable that those people and places are as they are because of their history. A sense of historical group identity is natural and even necessary, it's just that there are many ways of expressing it.

My sense of identity is a puzzle even to me. I am an intelligence, a sensibility, and a nervous system that appears to be concentrated in the body writing this. I am a hybrid who is, most of the time, at home with his hybridity. I am a human being. I love what human beings love and survive as human beings survive. That must mean something. I am very fond of the place I live in. I think it is a humane and human place.

Please can you tell us about the process that you go through when writing. When does inspiration become a poem?

Almost immediately. All poems are acts of intense listening. An inspiration is like a faint shudder in the spine. I can't quite tell what produces it. As Michael Longley said, 'If I knew where poems came from, I would go there.' I have some notion of a subject, a focus of some sort. This subject will entail a feeling, but it isn't a particular feeling, more a feeling that there is a complex of feelings waiting to be encountered. Poems are explorations, not a form of taking orders from a directing will.

In practice, I seek for an opening line then enter a period of furious concentration in which it is the words themselves that must produce the movement. I have to hear and see the words as clearly as I can. The images must appear and offer themselves in concert with the words, or vice versa. I don't really know which way round it works. However, being in my way a formal poet, certain issues resolve themselves in advance. Is there a rhyme scheme?  A stanza form? Will it be a particular kind of poem (sonnet, terza rima, villanelle, sestina, canzone) or just a series of echoes and repeated sounds in some other, less specific order? Will I end-stop any lines? All lines? None? Will the lines be even? Will they be long or short? Can I tell how far I have got into the poem? Does the direction need changing this way or that? If I am getting to the end how do I leave? I can sense the end approaching but I don't want it too firm. Or do I?

But all this happens fast. I have compared the process to a kind of slalom, weaving fast between poles of structure. I can't write slowly. Maybe that is why I am prolific. With some luck the sense of giddiness I feel in writing - the sheer excitement of it - will transmit itself to the reader, who is, after all, a human being like me.

Is poetry all about inspiration?

It depends what you call inspiration. To the degree that all poetry is an act of improvisation - even the art of Dryden and Pope is improvised or it is nothing except a body of ideas and attitudes - it does depend on the flight of the moment, and the traditional Muse is often depicted as a flying creature. But improvisation is active. You must have something to improvise on and you must be willing to engage in the act.

Neither is the product of a text book: they are the products of intense listening.  They are not a set of diagrams for an assemble-it-yourself kit. The diagrams exist and may be played with, but in themselves they are little more than identikit furniture. Intense listening takes time and a good gut instinct.

Is translating an act of creation, a process of renewal?

It is an act of shadow creation. The poet's work of construction of the poem in its original language is over - it's not going to change - but we all know that poetry is not a matter of single meanings. A poem is its reader too. The reader undergoes what the poet has undergone in the making. The experience is multivalent. Let me take a metaphor:

We can think of the poem as a transmitting tower radiating all its possible interpretations. The translator picks up a signal that seems to emanate from the tower (one of many such possible signals) then goes about constructing a new tower that seems to transmit something like the original signals. It will never be a copy of the original, but the signal will be stronger or weaker depending on the translation. In the end it will - it must - feel like a newly made poem, a poem improvised out of the air, as a poem should be - a transmitting tower that somehow built itself.

The best translations are poems in their own right that have entered the new language and become part of it, but they broadcast to a home audience. I sometimes think that is what I am as a poet - a translation that has become a home transmitting tower.

You have said elsewhere that writing poetry is a “way of registering truth”. Can this be a painful process?

Not in the sense of a confessional, not for me. Writing is excitement and joy: even writing about dreadful things is a joy.

A small modification to the line above: Registering a truth is like registering a presence that you cannot objectify. There is no such thing in poetry as a single definable evidential truth. It is what rings true and continues ringing true. It is the ringing that is registered.

Your return to Budapest in 1984 had a very important impact upon your writing. Could you tell us more about this?

It gave my sense of life somewhere to be, somewhere, at least, to start out from. It offered itself as the floor of primary experience under the floor of language. It was a realisation of what history means in physical terms - as texture, taste, smell, sound, presence, apprehension. It was the tragic sense asserting itself, sounding at a deeper level.

The poems became longer, denser, more exploratory. The themes I found in Budapest remained with me for twenty years and remain the sounding board for everything since. When I want to feel the significance of something that is still the board it sounds against. It is the space of tragedy.

I don't become broody or doomed as a result of it: it makes me feel that the tragic and the comic are part of a single universe: that the absurd and the governed perform as a duet, at depth.

What are you working on at the moment and what plans have you for the future?

Having had the big New and Collected Poems published in 2008 and The Burning of the Books in 2009, I have been running a little wild - experimenting with abstractions, with more demanding forms, with collaborations, with more overt aspects of modernism and beyond, with tiny micro-poems or poetic-texts. I blog, I tweet; I try to think and feel as richly as I can. My forthcoming book, Bad Machine (2013) will have some of these elements.

After that I have half finished a book collaborating with the poet Carol Watts.

I want to find a form of publishing the micro-texts. I would like to sit down and embark on a longer work based on memoir, but not memoir, though I can't do that until I stop teaching. Meanwhile there are the translations, fiction and poetry.

Then there are new grandchildren - I have just published my first book of children's poetry since 1997. Once the grandchildren get to reading age I'd love to produce work for them, to give them some delight.

There! - That's the word I would like to haunt these answers. Delight: not uplift but an odd hovering of the heart at the sheer beauty of things.

You can read more of George's work widely on the internet or look back at The Ofi Press archives to see a poem we published here back in issue 6. https://theofipress.webs.com/szirtesgeorge.htm