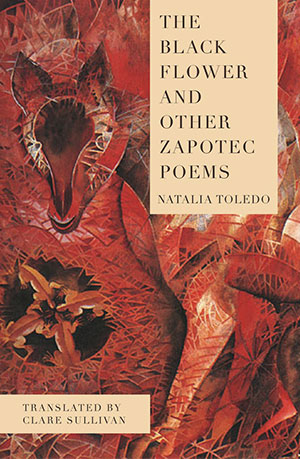 The Black Flower and Other Zapotec Poems by Natalia Toledo and Clare Sullivan (transl.)

Natalia Toledo’s vivid collected work, The Black Flower and Other Zapotec Poems, is at the same time lush and sparse. The poems are jewels; small, but scintillatingly bright, drawing the eye from line to line and shimmering with quality. Clare Sullivan translated this book from the Zapotec – an extremely difficult task given the tonal qualities of this ancient, indigenous-Mexican language. The problems which this presents are explained in beautiful detail in the translator’s note which ends the English section of the book:

Another tantalizing aspect of Toledo’s poetry that may be lost in translation is the sound of Zapotec. This sound draws in listeners when Toledo reads in Italy, Thailand or Mexico City, even when they cannot understand the meaning of her words. That’s because Isthmus Zapotec is a tonal language with no relation to Spanish or to any of the other almost three hundred indigenous languages of Mexico. Since English is not tonal, I cannot capture this musicality. I can, however, strive to imitate her patterns of sound and the way sound echoes meaning.

Toledo has worked as a chef and a jewellery designer and the attention to detail both careers require is made brilliantly evident in this work. Food and colours, textures and smells are brought to the fore with an intensity that would be off-putting, overwhelming, if the poems were any longer. Since the verses are so brief, the reader is let with a tantalizing, intoxicating key-hole glimpse of another, richer world. In ‘Wild Cherry Sweets’, a piece of candy is examined at such close range that it metamorphoses into something sensual and rare:

the eye of a tropical fly

black like the backside of a pot upon the fire,

a teardrop formed in the forest.

Little marble from a tree,

sweet as the lips of an old man speaking,

I devour you in May.

The poem begins with images of disgust; the faeces of a goat, the eye of a fly, the burnt bottom of a pot, but the images themselves are so perfect, so detailed, that they are revealed as beautiful, desirable; something that the reader is drawn to suck.

Because of the extreme specificity of the culture that is being described, some of these poems seem to verge on the surreal. This makes them in no way less beautiful. In an untitled poem, a life’s worth of bitterness is collected and distilled into joy:

I saved my tears

so they could break it over my head

on my wedding day.

In this way, sorrow is transformed into blessing.

my flower offers you a drink.

You enter where the stem is tender,

in search of a mirror that says your name.

This book is over a hundred pages long, but because it has been translated into more than one language, provided with a thorough translator’s note, and generously introduced, it contains barely a double-handful of poems. My appetite was whetted by the poems presented here, but I was not satisfied. I would have preferred a larger ample of Toledo’s work to ingest, process, and then to comment on. This brevity (which is a virtue in the poems themselves) is the greatest flaw in the larger context of the book.