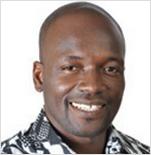 Teddy Totimeh is 38 and studies in Israel. Until recently he worked with The Writers' Project, Ghana and host a radio show where he interview some Ghana's most prominent poets.

1. Can you tell us a little bit about the roots of Ghanaian poetry?
Ghana was a crown colony at the peak of Britain's power in West Africa.  It was touted by the British as a model colony because of its contribution to the Commonwealth from mineral reserves, rich forest produce and cocoa.  Ghanaians were proud of it, so proud that it became fashionable to let go of history and culture, for a foreign identity and lifestyle.  In the years after independence from the British, the notion of nationalism and Africanism was pushed by the then President Nkrumah.  His influences in these directions were cut short by military coups and Ghana went through a thirty year period when true intellectual development was hampered.  In the last twenty years, Ghana has been rediscovering itself, and this is the mix in which poetry has to sink roots.  Our various cultures are deeply oral and rhythmic.  The anglicisation that came with colonisation has produced poetry that was typically appellative, lofty proclamations that describe even the most everyday actions with colourful language.  This actually echoes Ghanaianisms in our various languages, where speech is ceremony.  In recent years, I have seen poetry in Ghana moving more towards everyday language and issues, in styles that are as varied as they are interesting.  This is a really exciting time for poetry, because suddenly all the triumphs and tragedies of our history are contributing to the work of young poets who are ready to break new grounds and let their hearts speak.

2.      How does the ethnic diversity in Ghana affect its poetry and culture?
Ethnic diversity is an interesting concept in Ghana, because there is so much cross culture intermarriage that there is this interesting coagulation of cultures and values.  A lot of the current writing is coming from people with more of an urban background, but I have seen a lot of poets digging into the cultures of their parents for inspiration.  Diversity therefore ensures that there are Ghanaian poets who stick to the appelative style, weaving proverbs and pithy thoughts into riveting stage performances, and also some whose poetry just flitters in the wind.   By the time the picture of the poem settles, the voice has disappeared...

A recent collection of poetry has been published by the Writers Project, and I find the diversity there not as influenced by ethnic background as it is by every day experience.  Of course, the other point is language.  Most of the poetry is in English, but there are also a lot of poets doing stuff in their own languages and especially at Spoken word gatherings.  The interesting thing about these sessions is how exposed the English language becomes, in its colourlessness, when spoken alongside some Ghanaian languages in a poem.  The lack of writing for many years in our various ethnic languages placed the burden for impact, on the spoken word.  There are words in our languages crafted to  evoke powerful images in ways that English would never do.

3.      How does Ghana’s colonial past impact upon its culture and poetry? Is foreign rule viewed romantically or with disgust?

The days when Ghana's past were looked at as romantic, are coming back.  People get frustrated with the disadvantages of self rule.  There was so much romanticisation of the whole concept of independence.  There was so much promise for the country.  There were resources that seemed inexhaustible.  The sky seemed to be the limit.  Now fifty something years down the line and sometimes it seems like there is nothing much to show for it, because countries we were at par with in 1957 are now Tigers.

Health and education were accessible and invested in, now they are left to deteriorate and there is desperation in the forgotten back streets and villages, even though the country has a lot of good press around the world.

I have heard some poets wonder if colonialism was really that bad.  However the apartheid era is still very fresh in the minds of a lot of Ghanaians and always comes up in discussions.  I would say there is a mix of opinions, even though I can feel a current of self determination emerging.  A spirit of self dependence that minimises the role that government plays.

4.    Can you tell us more your radio programme where you would interview other Ghanaian writers? Do you have a particularly memorable experience? How did it affect your own writing?

In university I ran a radio programme for writers, and had to give up when the pressures of work took me away from really creative work.  That programme actually still runs on the University radio station.  I was invited to present the most recent radio programme last year, because the substantive host, who has been my guest, and later co-presenter on my University radio programme had to do some research work in the US.  I had a great time sitting in his seat for a year.  I handed back the mic when he returned.  It was an awesome experience, but one thing was the same.  It was the same vibe all over again.  There was an eagerness for literary excellence that was palpable in the studio.  There was also some exuberance that had to be guided into better poetry.  It opened my eyes all over again to the fact that literary art is so essential to the society.  The written/spoken (poetic) word can never be buried by combusting economies, recession or bad political leadership.

I think it pushed me towards less structured writing, even though I had been doing quite a bit of that before then.

Spicy chilli.  Deceptively mild, sitting on the tongue and then suddenly bringing out the beads of sweat on the forehead.

6.       What’s your favourite poem? What sends a chill up your spine every time you hear or read it?

You know, I tend to be a little on the classical side.  I have never lost my captivation with Keat's elegies and the sad beauty of his language, or the shining milkway of Wordsworth's Daffodils.  I have a few contemporary favorites, but no poem comes to mind at the moment as powerfully as these two.

7.       Your own work seems to see beauty in the seemingly chaotic and ugly. Can you tell us more?

I think that God created us to reflect Him.  Each one of us.  White, black, red, mixed created to reflect His beauty.  Even in our ugliness.  Beauty hides everywhere, as long as we are ready to see it.  Death is the ultimate ugliness, and yet it shows us that life just cannot be taken for granted.  As long as there is life, there is potential for goodness.  I am learning not to look down on anybody as long as they are alive.  Because some of the greatest beauty still lies undiscovered, waiting for the open mind and heart.

Poetry is life in snippets of sound.