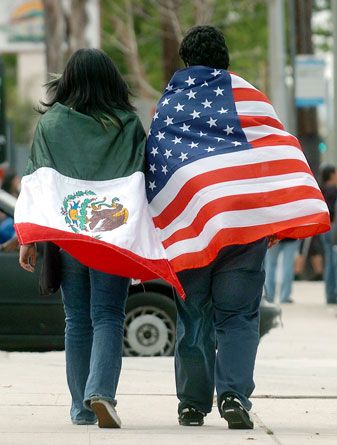 The territorial United States has long been a home to Spanish speakers and writers.  Poetry written by Latinos in the US goes back to a time before 1776.  In recent years, however, there has been a new wave of literature written by Mexican-Americans, Puerto Ricans, Cuban-Americans, Dominicans, and others who now live in the United States – U.S. Latinos.

This most recent boom in literature finds its roots in the social and political events of the 1960’s, particularly the Civil Rights Movement.  The 1970’s saw the addition of courses in Hispanic Studies added to the curriculum in colleges and universities of the US.   By the 1980’s, there was already a second generation of US Latino writers, many with college degrees in creative writing (Kanellos).  The continued growth of literature by US Latino writers in the new millennium suggests that the trend is now mainstream.  Novels and poetry – in English, Spanish, and sometimes a combination of both – by these writers are now published by small presses and large publishers alike.

The current state of US Latino poetry owes a debt to the Chicano Poetry Renaissance of the 60’s.  These poets were sometimes writers with little formal education and other times those with advanced college degrees.  In either case, they saw their role as one of helping the disempowered, farm laborers, factory workers, others on the margins of society.  Much of their poetry focused on developing a “Chicano” identity through the appropriation of mythology from Mexico, the use of code switching and vernacular language, the continuation of an oral tradition, the search for the mythical Aztlán.

Consider the poetry of Alurista who created a bilingual poetry that suggested the street language of many Hispanic youth (40):

melting on my cheek bones

the scars of history on my face

and the veins of my body

I do not ask for freedom

Or these few lines by Luis Omar Salinas (187) which beckon Chicano readers to consider their indigenous Mexican heritage:

I am an Aztec angel
offspring

Ricardo Sánchez (199) urges his audience to consider their indigenous identity, their role in society, their humanity in his poem “it is urgent’ which ends with the following stanzas:

we are the urgent voices

stemming from our human-ness…

WE ARE UNIVERSAL MAN,

WE ARE LA RAZA

the cradle of civilization

The spirit and energy of this early period is best reflected in the anthology by Octavio Romano, El Espejo/The Mirror published in 1969.  The title alone reflects the search for identity and there are many works which also reflect the struggle against social and political conditions of the times.


US Latino Poetry: After Aztlán

The Chicano Renaissance was followed by an influx of immigrants, especially from Cuba.  These poets, as well as poets from Puerto Rico and immigrants from places such as the Dominican Republic added their voices to those of Chicano poets into what is now known as US Latino literature.  Although authors themselves identify as Mexican-American, or Puerto Rican, Guatemalan, such geographical divides in terms of literature have become less pronounced as Latino poets share the page with their Hispanic brothers and sisters. The anthology After Aztlán: Latino Poets in the Nineties, compiled by Ray González, reflects this change and also places the movement in relationship to the earlier generation of Chicano poets.

Sandra Cisneros, well known for the success of her novel The House on Mango Street published in 1984, also gained attention as a poet during this era.  Another fiction writer, Dominican Julia Álvarez, also published poetry.  Puerto Rican poet Martín Espada not only published several volumes of poetry, but his work Imagine the Angels of Bread, 1996, won an American book award.  Clearly US Latino poets of all backgrounds were publishing and receiving national attention.

On the west coast, Chicano poet Francisco Alarcón began attaining national and international attention for his poetry, sometimes in English, sometimes in Spanish, or even in Nahuatl.   Consider this poem from his work From the Other Side of Night/ Del otro lado de la noche: New and Selected Poems (187):

The focus here is no longer on social identity, but on broader social issues.  But this new generation was varied.  Consider the angry voice of Jimmy Santiago Baca in his poem “So many Mexicans are Taking Jobs from Americans” (24):

Oh Yes?  Do they come on horses

with rifles, and say,

And do you, gringo, take off your ring,

drop your wallet into a blanket

spread over the ground, and walk away?

Pat Mora attained a wide readership with her poetry for adults as well as picture books for young readers.  The opening poem in her Book of Practical Saints, shows a subtle humor and deep understanding of the role of Catholic saints in the lives of her ancestors (11):

At sixteen I began to pray to you, old friends,

for a handsome man who would never stray.

please grant me this miracle.

may he frown at liquor

for Mother, could he be a millionaire.

Clearly, the 1980’s and 90’s produced many new and well-trained Latino poets in the US with styles and themes as varied as their countries of origin.


The Current Wave: The Wind Shifts

Francisco Aragón captures the significant changes from previous decades of US Latino poetry with the title of his anthology The Wind Shifts, published in 2007.  Some references to the mythology of Mexico appear; issues of identity continue as themes, but much less than in earlier years.  A few poems appear in code-switching and some bilingual poems that appear side by side.  These new poets, however, show a strong interest in developing the craft of poetry.  Most have attended graduate school and have degrees in creative writing from some of the major university programs in the country.  These poets and their work tend to be more urban.

Brenda Cárdenas uses Spanish and English in her work.  Not to create a street-like tone, but rather to double her opportunities for alliteration.  Consider a few lines from “Duración – V” from  From the Tongues of Brick and Stone (32).

Aquí
The new sounds echo
a chamber older than memory.
Our v’s fling their arms open
and come back to us.   B’s.
We have seen balas
faster than veins of light
etching the night sky.

They fill our heads with ringing.

Rane Arroyo acknowledges his debt to the work of earlier Hispanic poets such as Pablo Neruda in Arroyo’s poem “The Visitor” (22):

always a vague ghost nostalgic for

the blue bread that we eat to forget

our missing talent for love.   The dead

have mud for skies, ¿no?  Imagine, poet,

we can incorporate, shell shares in ourselves!

Sí, the world is still extraliterary.  Are there

bakers in the afterlife?  Poetry asks for you

by name, the one finally yours. Stop grinning.

Rigoberto González writes lyrical poems about family, death, characters of everyday life.  “What Smells Dead” is from his book So Often the Pitcher Goes to Water until It Breaks (73).

If through whisper and caress we sense them,

if the yellow light sneaking out

at the splitting out of their bones betrays them,

why not notice the dead through smell?

of gloves or those that rise from the mouths of shoes,

from the chair just emptied;

there is also the discharge of passions.

In lovers, the older the corpse, the stronger the letting go.

And while earlier writers acknowledge a link to Spanish poets of previous times, this generation also acknowledges Keats, Whitman, Rita Dove, and others of the US cannon as well as Neruda, as their inspiration.  Eduardo Corral gives a nod to Robert Hayden in his poem by the same title “To Robert Hayden”:

You lifted the lid,

sand. As you fastened it

I thought again of

Writing in 1971, Felipe de Ortego y Gasca lamented that there were no Chicano poets (or novelists) listed in the Cambridge Dictionary of American Literature.  And in 1980, Gary Keller and Francisco Jimenez complained of the few outlets for the publication of creative writing by Hispanics in the United States.  Today, Arte Público Press brags of more than 30 years of publishing and Bilingual Review Press, founded in 1973, has nearly 40 years of publishing history.   However, today US Latino poets are publishing with major houses such as Sandra Cisneros’ Lose Women by Vintage; Healing Earthquakes by Jimmy Santiago Baca from Grove Press; Pat Mora’s Aunt Carmen’s Book of Practical Saints, by Beacon Press; books by Gary Soto and Francisco Alarcón, by Chronicle Books; Lotería Cards and Fortune Poems by Juan Felipe Herrera by City Lights, and this is but the beginning of what could be a long list.  Even more Latino poets have published with smaller presses, as is true of poetry in general in the US.  These authors and their books are reviewed in the New York Times and included in the Norton Anthology of American Literature.  Like Black literature, work by US Latino poets has become more mainstream today.   Perhaps sometime soon there will no longer be the need for adjectives such as Black or Latino and all poets will simply be considered US poets.

Alarcón, Francisco X.  From the Other Side of Night/ Del otro lado de la noche.  Tucson: The University of Ariona Press.  2002.

González, Rigoberto.  So Often the Pitcher goes to Water until It Breaks.  Urbana and Chicago: University of Illinois Press.  1999.