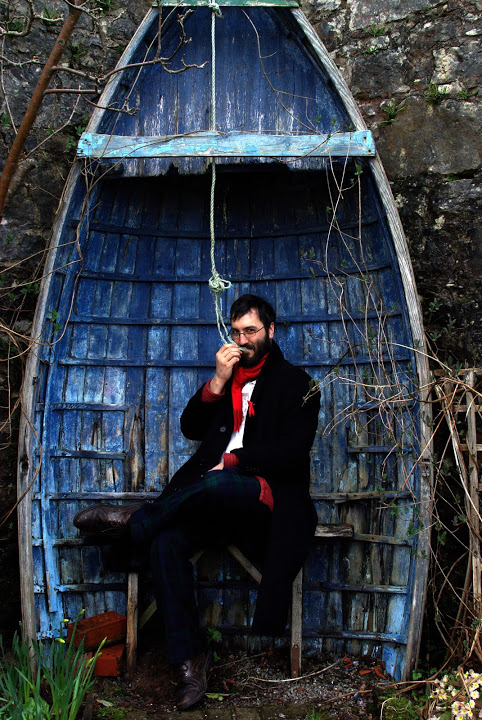 RYAN VAN WINKLE is a poet, live artist, podcaster and critic living in Edinburgh. His poems have appeared in New Writing Scotland, The Prairie Schooner and The American Poetry Review. His debut collection was published by Salt in 2010. His second collection, The Good Dark, was published in May 2015 by Penned in the Margins.

He was awarded a Robert Louis Stevenson fellowship in 2012 and was listed as one of Canongate's 'Future Forty' in 2013. His poetry / theatre experiment 'Red, Like Our Room Used to Feel' was one of the top ten best-rated shows at the Edinburgh Fringe Festival in 2012.

He is also the host and co-producer of the arts podcast The Multi-Coloured Culture Laser.
Find his website at www.ryanvanwinkle.com

His new collection The Good Dark is available from Penned in the Margins.

Interview carried out by Jack Little (Mexico) in May 2015.

1. In your poem “Untitled (The Decemberists)”, you write “all my childhood was snow”. How much of your childhood comes out through your collection? To what extent are you the same man today that you describe in these poems?

My childhood, or rather, childhood in general is one of my recurring concerns. I originally resisted having poems in this collection about being younger as I felt I was writing directly about stuff which happens to adults: relationships fail, people get lost, some of us die sooner than we should. However, poems like 'Untitled (Decemberists)' kept creeping up and felt necessary to include because – and I'm just saying this for the first time – I think a lot of our secret orders come from that place and time. Amongst many things which occur in this collection, such as getting into a car where the seat-belts were burning hot, I can remember being a boy and understanding that summer ends. Summer closes and we must go back to school and, therefore, one day school will end and we will have to make another change. I was always aware, I think, that the enjoyable time I was having would end or, conversely, the miserable time I was having would end. Which, I guess, is why the poem opens:

All my childhood was snow: summer snow

below the fires of the Forth and September

snow in my bowl, rushed before the bus rose

I say, I guess, because I wasn't really aware what I was getting at until long after the poem was written and I'm also reluctant to close off interpretations for other readers. For me, those opening lines are an attempt to juxtapose the end of summer (July 4th fireworks) and the start of school when things like bullying and social insecurity would return.

I think part of the tension in the collection is that I don't know how much of my childhood & adolescence or even my young adulthood to carry with me. You get comfortable, as a kid, with a certain idea of yourself. If you were a particularly awkward child you get comfortable feeling like an outsider, feeling like the odds are stacked against you – you distrust phonies, you feel a sense of doom or dread even at banal or lovely moments like someone else's wedding. As I've gotten older, I suppose precipitated by the break-up which is the thematic spine of this collection, I've realized a lot of how I behaved was born out of a rather outdated concept of who I am. I feel like, for a long time, I was a computer running Windows 95 or something. Sometimes it is scary to upgrade, lots of your programs will become obsolete, but you kind of have to do it. You can't live in the comfort of 1995 forever. (Or can you?)

2. Living so far away from the United States,  your birth country, do you consider yourself an exile? How much of being so far from your other home impacts upon your poetry?

No, I don't consider myself an exile. Though, I joked about that during the W years. Frankly, I don't even think of myself as an ex-pat. I'm just one of the many people who lives in Edinburgh though I'm not from here. That said, I enjoy the fact that I have a different accent and I feel comfortable being slightly out of sync with the people around me. I feel like people give me more time to be clumsy with my change when I'm ordering a coffee just because I don't sound like I'm from around here. I feel most at home when I feel like I don't belong. Living in a foreign country is comfortable and natural for me in that way. I regularly find myself working out how I feel about that.

Otherwise, I don't tend to ever write directly about being away from home. The two places, these days, seem to overlap in my head and my writing. A poem can shift from place to place pretty easily though not in any discernible way. (I think one of the rare times a poem goes between Scotland and America is in 'I Do Not Want Rain for Rain' which I'll talk about a little later.) For instance, in the line I quoted above – 'the Forth' could easily be a reference to the Firth of Forth or the Forth road bridge if people happen to know those places. I, personally, like that overlapping. And sometimes I prefer an aubergine to an eggplant or a parking lot to a car park and I am glad I get to use the word that I feel suits the feel of the poem I'm working on.

On a larger scale, I think distance in general helps me write. I've never been good at going to Italy and writing a poem that captures Siena, though I can sometimes do it when I return home and process my own impressions.

3. When you look back at the memories of your life through poetry, how easy or difficult is it to avoid seeing the past through rose-tinted spectacles or perhaps muck-coloured spectacles?

I see the past as both a nostalgic golden place and, as you suggest, a dark labyrinth of a place. For me it really isn't about choosing what spectacles to wear when I'm looking back but acknowledging that there is a lens between my work and the reality. I'm aware in my work I can drift towards romantic nostalgia but make an effort to shade that. So, I'd hope a poem like 'I Do Not Want Rain for Rain' will have equal measure of rosy moments as well as muck.

The truth is that life isn't neat and memories often can falsely omit the uglier parts of existing. As much as I can, I try to control for that. Basically, I'm wearing both spectacles at the same time. How do I look?

4. Vulnerability seems to be an important theme in your collection. Can a “good dark” be born out of this vulnerability?

Imagine a sapling in a storm. It will bend in the wind but not break. An older tree, however, is hard with bark. In a storm, that tree will break. I can't remember where I first came across this idea – I think Tarkovsky's Stalker but I'm unsure – but it often is on my mind especially when there is a darkness in me. There is a value to remaining supple, to bending in the wind rather than breaking. A good dark is a place, perhaps, where one can explore the negative effects of vulnerability – like heartbreak – and revel in it, challenge it. But, yes, absolutely – vulnerability is essential to life.

5. Your collection is filled with secrets and I imagine many of your poems as a half opened box that I as a reader look into for just a few moments. Are the secrets enclosed in “The Good Dark” of a very personal nature or could they be considered universal to all?

I like that idea, thanks for saying that. It is a spot on notion and partly why I chose that Athol Fugard quote as the epigraph: ‘The place from which you take your orders is probably the most secret place you have.’ That said, this collection is as revealing as I can be and I do my best to describe the secret place I have gotten my orders from. In other words, if there are secrets in here, they are also secrets to me. It will require more digging to get to those and I'll likely dig for those secrets the rest of my poetic life.

The Good Dark Available Now From Penned in the Margins

Waterloo Tea at the Wyndham Arcade

FREE After party at The Forest from 8pm -- featuring musical guests Supermoon & Faith Eliott and more ...