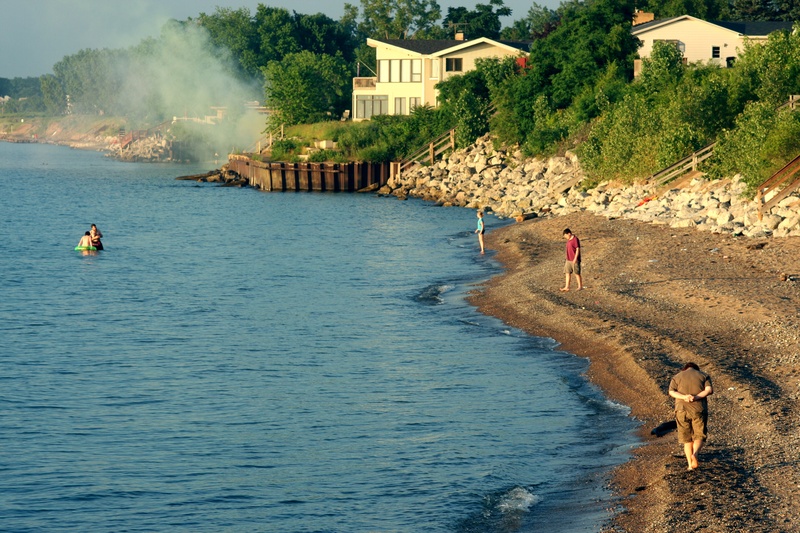 on a white hill reaching

into the fridge for a pint

of milk while rivers flooded

from what we spilled. My grandmother

said one thing when we married

that we should never go to bed

to our chests. She slept

in a separate room, locked

his laundry till it was clean and kept

quiet as our house, quiet

as a jar of olives, my microwave still

blinks, a lake of milk by my feet. I trail

back to bed, stale them in sheets.

"It was a dark and stormy night"

It was a dark and stormy night.

The cage was covered

so the bird went to sleep. Switching

the light on I wandered

through the flat house covered

in the dust of a day. Piles

of books lay uncounted and closed

on the carpet among the veins

of maps, the hills I could have climbed

while the sun was open. I counted the letters

I should have written on the hill,

locked in a jar, carried home. For

when the night turned stormy

I could have said, "I have done

something. I have run

for beauty. I have begun."

It was that kind of dark and stormy night,

I could not sleep.

The bird could not sleep.

This is what it feels like to get older,

to lose the mask of yourself. They say

not to look in a mirror at midnight.

They say, you find a ghost there,

a future spouse, your killer

looking over your own shoulder. I look

at my own eyes. Grey as flags

left on a pole too long. I am sure

I graduated from university. I am sure

I had a favorite cartoon and I know

I watched that video till it bled. I know

I would go home after school. I know

there was Mother’s ritual folding

of bread. I know I left home.

I know I drank wine

without permission. I know

I drank wine with permission

and dropped the glass. I know

I have dropped more

than I'll ever remember. I know

of the things I've dropped.

I know it would remind me

to hold. I know I dropped a light bulb

and I know I was happy

when a shard of glass sneaked

so deep into my foot

I could not squeeze it out,

but accept it as mine.

It was a dark and stormy night.

I had to meet someone, a shadow

with my face I had to confront.

There was a storm of broken light bulbs, a storm

of lightning bugs in a jar. There was a million things

I meant to say to myself while the sun was up,

while the mirror was clear. There was a pile of books

I needed to remove.

It was a dark

I am more water

than I am light.

I feel more for water,

think more about it.

and is at rest

on the dark, quiet side

It was a dark and stormy night and I

was as visible as anyone, maybe

revealed a little by the rain. But she

began to call me Moon as if

I was far away. Hey Moon, are you

hungry? C'mere Moon, give us a kiss.

this is serious. We must call a meeting.

This was a dark.

This was a good dark.

This was a dark dark.

This was a bark of dark.

This was end of the reel dark.

This was a varnished dark, a hull of dark

on Death's Ship of Dark steering north into a storm

color of wolf fur and no red

riding anywhere near so his claws

and begged so I wrapped

a blanket round my treasures,

tied them to a stick and went

to where I knew a boat was waiting, its dark sails

It was a dark and stormy night -- I dreamt

I was walking with strangers -- candles in jars.

When Lennon bit the sky someone said

there are many ways a star can fall. I saw

a woman pushing her eyes into her skull

and did nothing. I saw flies in a mason jar,

languid and plump as raisins stuck in sugar

and I did nothing. I saw light bulbs explode

and stars giving up to gravity and even when

I saw my mother’s hand shock

a jar of peanut butter to the floor

I did not fetch a cloth, sweep up shards.

I did not dry her palm of blood or hide

the chipped tile from father. I did not look up

long enough to make a wish. I made no wishes.

I saw a boy send his finger into the sky

on the back of a roman candle.

I walked right up to Mr. Death and asked 'How

do you like your lazy boy now?' I do not mind letting go.

when I mean a full stop.

It was a dark and stormy night. The wine was black.

From the porch I could see waves sharp

as shark fins and everybody was there,

we were always saying goodbye to someone

already gone. And I dropped the bottle

causing a sharp lake on the floor. Much later,

the phone was ringing, they said

It was dark. It was stormy.

It was the beginning.

It was also the middle

and the end. It was four

pages. It was black

and white and full color

on Sunday. It was copied

with Silly Putty, it was burned

for warmth or lined the bird cage.

It softened the package, smelled

our names singed into sky, our fingertips blooming

stars till our names were eaten, our sticks sulking

to ash in our hands. Our time of sparks would hasten

so shake another from the blue box

until the box is empty, until

the storm emerges, until

we we are old enough to write

onto skin, onto tongue, onto letters on paper

and all, we imagine, longer than sky.

in jars and plastic bottles and little containers which count

wishing upon as I never wished before. Zinc for bones,

for scars and burns and others I collected

without counting. Forgotten children, they sit in the back

of the chest. It was a dark and stormy night and I was counting

all the things left behind.

and dark, I says

and dark, the parrot says

and dark, she says

and we cover ourselves, make a cage

that this will be

the end of the world.

will rise and swallow

everything which can not

or will not float. This futon

will be our raft, the place

we'd swim to in summer

where parents could only see shapes

and not the point of prick or

She says she is sad

that this will never be the end of the world

that there will be a tomorrow and the day after tomorrow

until the dark and stormy night when the power went out 

when the light bulb exploded in its socket,

when the parrot learned to say dark,

before yesterday when the sheets were smooth, unwrinkled

alone. She says she can think of ghosts while holding me close, she says

it does not matter that the world is ending, that shadows

become ghosts, that her thoughts are often haunted

likes being alone at the end of the world with you, I says

The only thing there is in the world is the end of the world, she says

And shards, I says

Put your slippers on when you get up, she says,

careful what you step on in the dark.

Ryan Van Winkle is a poet, performer, podcaster and critic living in Edinburgh. His first collection, Tomorrow, We Will Live Here, was published by Salt in 2010 and his poems have appeared in The American Poetry Review, AGNI, Poetry New Zealand and Prairie Schooner. He is a regular contributor to the Prairie Schooner blog and was awarded a Robert Louis Stevenson fellowship in 2012. He is also the host and co-producer of the arts podcast The Multi-Coloured Culture Laser and the poetry podcast for the Scottish Poetry Library.