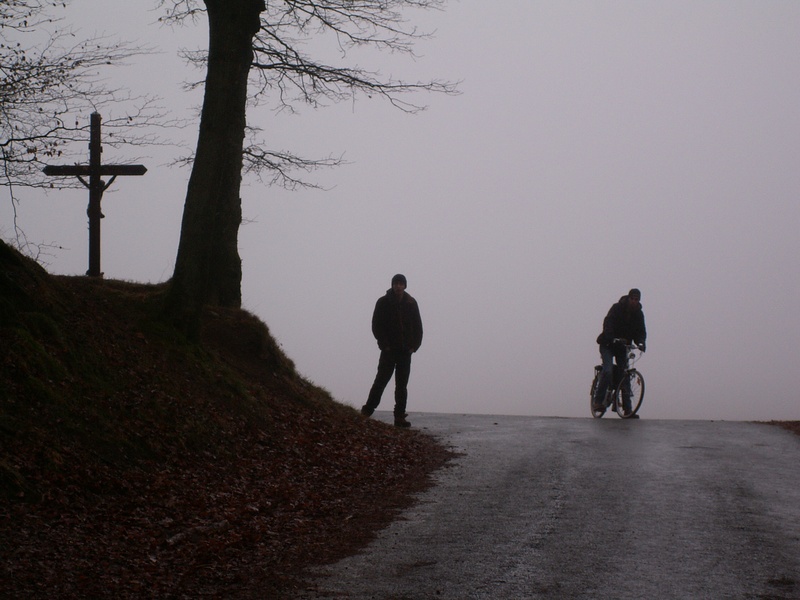 Some weeks ago, Maarten Derre, a thirty year old male from Belgium, arrived at the airport in Mexico City. What should have been the start of the realization of his childhood dream, building a new life in the beautiful country that  is, resulted in a complete mystery that looks more and more like a nightmare. Maarten never arrived in his hotel and it seems that nobody has noticed him, so there’s no clue as to where he’s gone.  I hear the reader thinking, ‘what a shame, but how is this linked to poetry?’ Well, I don’t know if you remember, we published an interview with Mr. Marcus Cumberlege back in issue 28. In one of the last questions we asked Marcus about young Flemish poets, where he referred to Maarten as someone who had ‘written some of the most exciting stuff in modern Flemish…’

Through our British poet we searched for contact with Maarten, with variable success. It’s true that he is not easy to grasp and when you, at last, think you’ve got his attention, he responds with silence. But in the few mails we’ve exchanged, he lets no opportunity unused to express his admiration towards Mr. Cumberlege as one of the only authentic and true poets that exist in this world (!) The reason he gives in support of his claim is that Marcus is simply ‘the personification of poetry’. But at the request of sending some of his own stuff he reacts rather uncomfortable and inaccessible, claiming his writings are not good enough.  After some insistence however he answers in an email that he is coming to  to show his poetry in person, ‘cause ‘it lives..’

These were the last words we’ve received from him, and everyday I hope to receive a message from him in my mailbox where he asks when we can meet. But ‘til now nothing has come and it seems so bizarre for me to let this history pass by without giving it a few words. This idea of a young, troubled poet that vanishes the moment he can touch what he dreamed about for several years, leaves so many questions unspoken and indeed unanswered. Perhaps with reason, but does this search following his disappearance not have some value? Is it not symbolic for the faith  against all odds thatevery poet or human being has to undergo?

But it is not our purpose to cultivate this history with far-fetched poetical musings, a person missing is not romantic, it is serious. Preferable above words are the facts. Our first step in this amateur inquiry is going to the police to ask if they have a trail. We want to describe where ‘the road’ is, not how it looks like!

The official version from these protectors of society is that the investigation is still in prgress, so: ‘no comment’. Between the lines, it was quite easy to understand that they’re thinking in two different directions, one being an act of self-destruction, another one of pure malice. Disappointed with the outcome, I catch at my last straw, his name: ‘Manin Vida’, a Mexican poet who immigrated in the eighties to Belgium and who had become a close friend of Maarten. What follows is Manin reacting to some questions I’ve asked about the disappearance of his friend.

‘Sure, I am worried, but it’s not such a big surprise. I think Maarten is utterly found of life, and is searching for death without losing life… how strange this must sound. But no, that does not mean that he has prepared some kind of escape-route, therefore he simply does not believe enough in preparation, in his eyes it is his use of time which may not be rewarded.

I never thought of him this way, but actually he is pretty pragmatic. The first time I met him he could not stop telling about his dream of moving with the ‘girl (at that time) of his live’ to the country of his ancestors. In some strange way he feels related with the mystical ‘religion’ that’s connected with the Aztec culture. But I think the real reason why he went to México was to meet a strange person with the name Mr. Märchen. You should know that Maarten had the most different and diverse interests. From his youth he was an almost obsessed geek in the power of stones, alchemy, numerology, astrology… and all that other crap. I’ve told him more than once that the answers he lacked in life can only be filled with fiction, that it’s healthier to accept and just to lie instead of searching and being disappointed over and over again. ‘But the gent is as headstrong as a donkey!’

Last year Maarten confided in me that he had a copy of ’22 makes 7’ in his possession. I don’t know if you heard of this, it’s better know with the title ‘22 poems that will get you killed’. The content exists of twenty-two poems, written in English, French, German and Spanish, and ridicules some wide-spread ideas, beliefs and concepts in the life-world of most people. There are only 7 copies made and most people keep quiet if they have read the text, ‘cause in some parts of the world, its possession will get you killed. But there’s also another reason why people keep quiet. The legend goes that there is a secret language in the poems that can be revealed with the right mystical knowledge. No one knows what the revelation would reveal, but curiosity keeps us going. This is certainly the truth for dream seekers such as Maarten.

I heard this ‘legend’ for the first time when I still lived in Mexico; an elderly lady asked me to dance and mumbled something of ‘the truth in 22..’ But I was unaware, ashamed because I am no ‘Patrick Swayzee’ (him neither…). So you can imagine the astonishment I experienced when Maarten, more than two decades later, repeats almost the same words. It was an ‘aha-erlebnis’, like I never felt before. Derre has the gift of saying things that at first sight seem irrelevant or just plain stupid, but they keep spooking one in the head, and years later they become true, or better said, alive. Then I, for the first time, understood why he always says that he does not believe in words. You know, Maarten believed in the French Poet Charles Baudelaire as a prophet, using the underlying thought of ‘les fleurs du mal’, namely ‘les extrèmes se touchent’ as the one true axiom in this world. All those influences he put together as one theory, became his unconventional life vision.

I wrote a bundle based on that idea, it is called ‘fairytale without words’, but only available in Dutch. Now I feel guilty ‘cause I advertise it, but I know Maarten will forgive me.

During the period after his confession, he seemed not himself. I honestly thought he was depressed caused by heartache, but he kept mumbling the names ‘Manin Märchen’ and ‘Saint-Germain’. I had a discussion with him, Maarten knows no borders, he sees them, but he trespasses without any difficulty. He can talk to a schizophrenic and five minutes later with a businessman or a professor, or with a drunk about sports or other junk...  but he lives the same way, which is not always so healthy. When I believed he was collapsing, he was occupied with his greatest poem. But I did not believe him and stopped all contact, the scared little man that I am. He did not even tell me that he was going to México.

No, I think he’s fine, he would enjoy the fact that we are guessing what has happened , while he not aware of the troubles he is causing. The only danger I see is that he acts like the ‘voyou’ he is, with the wrong people. No, not even then, he would smooth talk them! I think he found a name in ‘22 makes 7’, but I am not sure.

While I was thinking how I could end this wannabe inquiry that resulted in poetical gibberish and thus not in cold, straightforward facts, I received mail from Belgium. It was a woman that introduced herself as the muse of Maarten Derre, saying that Mr. Vida told her of our search for her man. Begging that if we would find him, to say, that she doesn’t care if he still writes or not, she just wants to see his eyes, hear and feel him.

What can I say, if someone who reads this, knows something more about this peculiar saga, please let us know!! We’ll keep you updated, I guess.