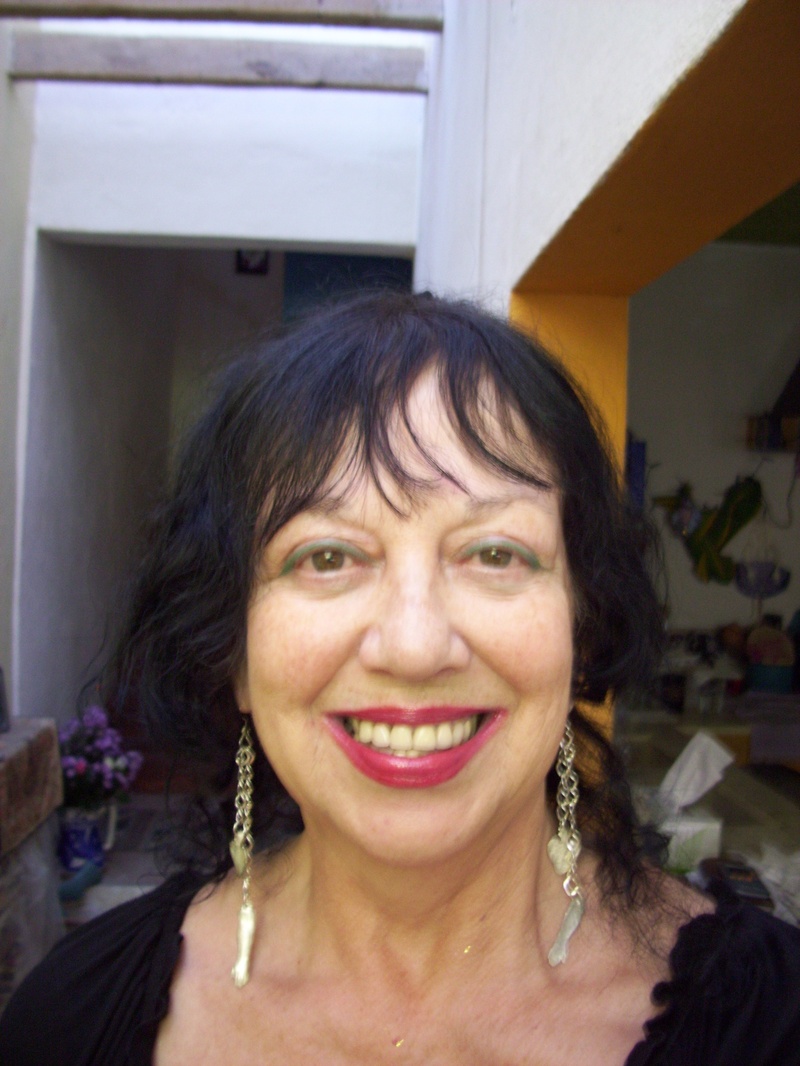 Alma Luz Villanueva is the author of eight books of poetry, most recently Gracias. Four novels, most recently, Song of The Golden Scorpion- and a book of short stories, Weeping Woman, La Llorona and Other Stories. Her poetry and fiction appear in many magazines, anthologies, textbooks- she loves the messages she receives from young textbook readers..."Why did you write this... Why does Luna swear so much, but it's okay cause I do too..." (third novel, Luna's California Poppies, often used as a textbook). Villanueva has taught for 20 years in the MFA Creative Writing program, Antioch University Los Angeles. She's lived in San Miguel de Allende, Mexico, the past 12 years, returning to teach, visit familia, friends.  She loves waking up to pre-dawn fireworks, announcing a new fiesta- rainbows in the sky. Here's her Authors Guild web site- www.almaluzvillanueva.com

Interview carried out by Jack Little in July 2016.

Published in The Ofi Press issue 49.

1. How does your work as a university creative writing teacher help or hinder you in your personal writing endeavours?

I've always found that working with students inspires me...the 'mama gene' LOL...but, in truth, I'm always surprised on so many levels. I taught at UC Santa Cruz undergrad for awhile, very young students. A poem, 'Crazy Courage,' was inspired by a transgender student- which was chosen for The Best American Poetry, 1996...also, in textbooks, anthologies, and Harvard included it in a student opera, love that. I now teach in an MFA Creative Writing program, Antioch University Los Angeles...students range from early twenties to seventies, and I love that age range. As I teach I'm taught, and inspired (sometimes very irritated, verdad)...many of my students become friends, and many go on to publish yayyy. I feel privileged to take part in their creativity, and their humanity...I've read, in student work, every kind of human condition, and it never fails to stop me in my tracks. The wonder of it, us humans.

2. What challenges have you faced as a Chicana writer in the US?

A loaded topic, of course, which I address and delve into via my poesia, fiction, non-fiction. When I began to write on my farm- the real writing- la poesia took me there, and beyond as well...transformation. In my country, the USA, I'v been called 'spic, wet back, dirty Indian' (when kids saw my Yaqui Mamacita...I learned to fight...she would toss me back out the door when I came in crying, to fight for myself, "No te dejes," shesaw my life...when I was 'victorious' we celebrated with still warm pan dulce y cafecito con leche). When I started school, Spanish first language...I could count to 100 and over in Spanish, read in Spanish- I was placed in the 'backward class.' Went to Catholic school where a Mexican nun taught me English, she behind a rose-worked iron gate. Then I stopped going to school for a while, it bored me...traveled with Mamacita all over San Francisco, China Town where she bartered for live chickens...she in Spanish, he in Chinese. I felt at home...the Mission District where she spoke her language. The Yaqui prayers to the Child Sun, her rattle, altars...I was brought up in an ancient way, and so I had to learn to navigate in a 'foreign culture.' Being a tomboy, stealing a bike, I navigated San Francisco, found my way. A bronze plaque, with an excerpt of my poem, 'They Didn't Get Me,' is embedded in the sidewalk by the Ferry Building...where I used to fish as a girl (disguised as a boy). The walk on the waterfront a treat- other poets/writers as you go...Allan Ginsberg, Diane DiPrima, Jack London, many more. **The title poem says it all...my 3rd novel, 'LUNA'S CALIFORNIA POPPIES,' mirrors my childhood to the move to my farm in Sonoma...where two crosses were burned on our front lawn, all in the novel. This is just a 'taste,' good question.

3. For you, what is the main purpose of literature and writing? Can it 'make a difference'?

We poets, writers are the Griots of our cultures, times...without our voices we humans would forget, not advance in our common humanity. Why else  would they drag out the poets, kill them, in political take overs. Poets, writers have saved my life from the beginning...Mamacita taught me poesia by heart to recite in church, told me the stories. Without her, no memory. Then I found the poets/writers who continue to save my life...we pass it on.

4. How important is 'truth' in literature?

5. How has living in both the US and Mexico over the past decades impacted upon your sense of self and also your writing?

In the USA I've been called 'Billaduda' and other versions of my name LOL...in Mexico 'Guuueerrraaaa,' and also 'Dueña.' Living in Mexico, I feel at home in my DNA, while knowing I'm at home in La Madre Tierra wherever I go. When I'm in Mexico I want to speak English- when in the USA, Spanish. My next libro de poesia, 'HEYOKA,' one who rides backwards into life...I realize when riding backwards, pure instinct, dreaming...when riding frontwards intent, vision. When I arrived in San Miguel de Allende...drove down from Santa Fe, NM... a pure white dove visited me on my wonderful roof at sunset for four evenings. Mamacita's Spirit, I brought her home...I 'tested' her, standing right next to her, she remained. The final sunset the pure white dove glowed with white light, never returned (in that beautiful form).

6. Do you have a time and place where you like to write?

Could you describe what the perfect setting is for you when you work? I'm a morning writer...when my four children were at home, I rose at 3:45am to write, the only human being alive, that silence. I've learned to enter 'that silence' wherever I am, even the airport...the desert, and the Sierras, where I lived for some years (I could hear the Sun rise pre-dawn, that hummmm/ommmmm). Early morning, Carlos Nakai flute, a lit candle, now pre-dawn fireworks, good cafecito, the ancestors in my ears...the memory of children sleeping close by.

7. What next for Alma Luz Villanueva?

In Bali I was wandering the Ubud Temple, came upon an eagle chained by the leg. It broke my heart, the fierceness of the eyes waiting to die/fly. An older woman approached me, I asked, "Why isn't this bird free?" (tears in my throat). "What is freedom, madam?" she responded, the fierceness in her eyes, the bird, the eagle, she later told me. Over tea, brought by a young woman, she showed me carnelian jewelry handmade by herself. The gems glowed like the sun- everything she made was simply beautiful. I thought of the ancient journey of the Eagle to the Sun, that freedom. She told me the eagle was her dream ally, guide- she was a also a healer. "I will let her go in time," she told me, meeting my gaze fiercely. I bought a sun ring and sun earrings- whenever I wear them I think of the Eagle, the Sun, her words, "What is freedom, madam?" In my recent novel, Song of The Golden Scorpion, the Golden Scorpion answers toward the end- "To love the self, the other." There are many answers to this question, and I will continue to listen for them within la poesía, the stories, and dreams.