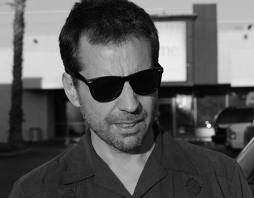 TWO-TIME EMMY AWARD WINNING Marcos McPeek Villatoro is the author of six novels, two collections of poetry and a memoir. His Romilia Chacón crime fiction books have won national acclaim (named a Best Book of 2001 by the Los Angeles Times) and are published in Germany, Japan, Russia and Brazil.

Marcos holds the Fletcher Jones Endowed Chair in Writing at Mount St. Mary's College. He has performed on NPR and appears regularly on KCET Television in Los Angeles.

Recently he and his family returned from his other country of El Salvador, where they shot the documentary TAMALE ROAD, now in post-production.

Marcos teaches and lectures on poetry, fiction, nonfiction, the Latino and Appalachian worlds, and tamales. His books are taught in colleges and high schools across the country.

Marcos, his wife Michelle and their four kids live in Los Angeles.

Interview carried out by email by Jack Little in April 2013. Marcos responded to all questions in Spanish. Published in Issue 31 (August 2013).

1. In your film, Tamale Road, you describe yourself as a "Pocho", a derogatory word for mestizo or or being of mixed race. Are you perceived differently by US citizens and El Salvador's citizens?

Well, it depends on the person. Many Salvadorians have treated me like a blood brother, always knowing that I am a gringo (by birth and also by having lived in the United States). Especially now, they is a Salvadorian pride that has come a response to the film which has occurred from the focus on Salvadorian culture. In the Unites States, it depends upon the place. Here is Los Angeles, I am part of the legion of how we say “mita-mita”. However, in other parts of the country, some people don’t know how to see me. And that is fine, it doesn’t bother me, especially now when the face of the USA is changing to a a mixture of all of the blood and different race on the planet, ¡qué chévere!

2. Being mixed race must bring challenges but what are the ways in which this has enriched your sense of self and identity?

Before, I felt a strange shame to be a “halfbreed” as some people would say to me. In truth, living in Tennessee, in the land of my Gringo father, there had never was a Latino culture, I hid the Latin part of myself. You know, to “assimilate” myself. I stopped speaking Spanish (that I has spoken as a child in San Francisco where I was born), and for many years, I lost the beloved language of my mom. However, as an adult, I came to realise that there is a force a power, that comes from two races. The languages, of course; but also before that, there are so many husbands and wives from various cultures and because of that their children are multicultural. BUT: to arrive at this significant point, I had to live in Latino communities: I lived in Nicaragua during the Contra/ Sandinista wars, then in Guatemala, then I worked with a migrant community in Alabama. Of course, now, I am in Los Angeles where I feel the most at ease that I have in my whole life.

3. You have said that "the past is not dead". Do we all have a duty to remember the past, the bad bits included?

The past is like the present moment: "jodido y alegre" (good and bad), as we say. And we need to confront the past, what happened during our childhood, our youth etc. Many say, “I am not going to look to the past, that is behind me, and it has nothing to do with my life now”. But avoiding one’s past is a terribly dangerous thing. To look one’s ghosts of the past directly in the eye, the hard times and the good, is necessary for moving forward. If not, you tie yourself up in pains that, even though are from the past, will always follow you.

4. Does religion and sprirituality have an important role in your work?

No, previously it did, I was very religious. I went to a Catholic seminary etc. But I saw also the scandals close to the church, the sexual abuse of young people and the cover-ups. I left. During my years of adulthood, I haven’t followed any religion.

5. What advice do you have for young aspiring writers?

Inspiration isn’t something that you wait for, it comes when you are filled with ideas. Tp be a writer means to sit at a desk and to write, every day. To be along for various hours each day (and many aren’t able to be alone for such a time). Leave the internet, and your phone and your tweets and friendships and family for four or five hours a day. Do not be afraid, even though the world will tell you that you haven’t spent your time well. Many doubts will come to mind, and you will have some moment of happiness, but none of these matter. If you say “I cannot live without writing”, then write, to survive through the arts.