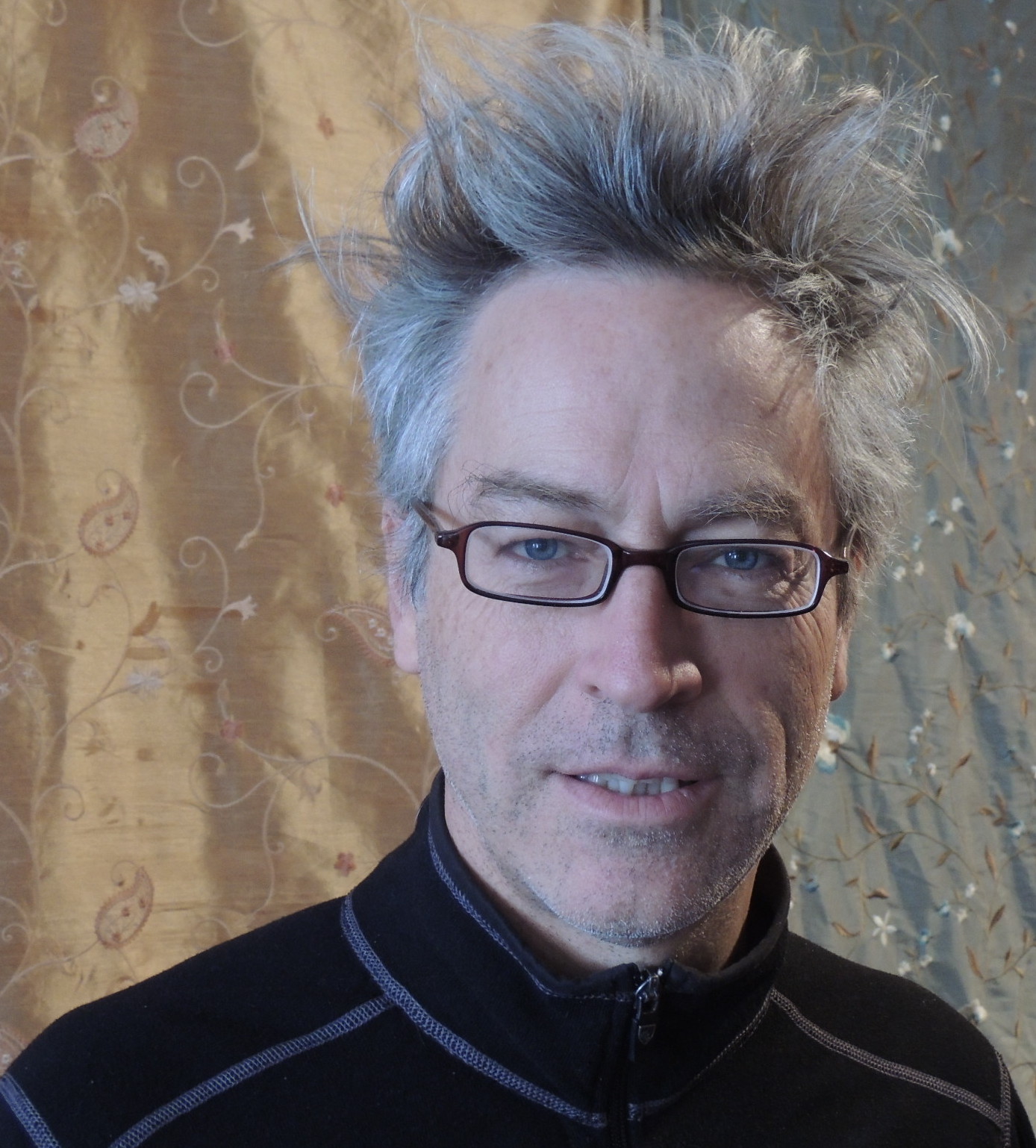 T.E. Wilson is the author of the Detective Sánchez series of crime novels. As a journalist, Wilson has reported from Mexico for the Globe and Mail, the CBC, CTV, RT (Russian Television), Rabble.ca, and InSight Crime, among others. He has received both a CBC Canadian Literary Award and a Gold National Magazine Award. Wilson blogs at La politica es la politica.

Interview carried out by Jack Little (Mexico/UK) for The Ofi Press issue 48.

1. Please tell us about your main character in Mezcalero, detective Ernesto Sánchez. What or who was the inspiration behind him?

Detective noir needs a compelling protagonist. I wanted someone quirky like Paco Ignacio Taibo II’s Héctor Belascoarán Shayne, and I also wanted someone who was a little out of control, a Mexican Dirty Harry. As I developed the character I began to feel that, as a foreigner, I couldn’t get away with an exclusively Mexican protagonist. Like it or not, I was an outsider, and my hero would have to feel some cultural alienation. To solve that, I had Ernesto spend twelve years in Canada, from age 16 to 28, which could then lend the story a “Mexican-Canadian” perspective. Then I closed my eyes and imagined my man. What emerged was a heavy-set, lumbering fellow with the body and gait of an acquaintance of mine in Canada. This is a person who was born biologically female, but who is living on a gender continuum that approaches the traditionally masculine. However, I knew Ernesto would be macho, fully anchored as a man, with a sexuality very similar to that of a traditional noir heterosexual. Suddenly, I had a character who could bridge both cultural and gender divides, while also driving a compelling narrative.

2. If a movie is made one day of the Ernesto Sánchez detective series, who would you want to play the role of Ernesto and why?

Well, if this is my fantasy pick, then first up is Benicio del Torro. Sánchez is a tough guy who cares, and del Torro plays those parts well, particularly in the context of the moral ambiguities of modern Mexico. Javier Bardem could do it, though he’s a little too pretty. Closer to the mark physically would be Michael Peña. And I love Luis Guzmán – he can look frightening, but has a soft touch – though he is likely too old.

3. How did your work as a reporter and journalist impact upon the creation of Mezcalero?

As a journalist, I have written a lot about crime in Mexico. Even my technology and business reporting often touches on security concerns. And my blog at La politica es la politica tends to cover the issues that Ernesto faces, such as corruption and violence, though at a higher level. But the truth is that I wrote Mezcalero in part due to my frustration with journalism, which is news- and market-driven, with a pretense to objectivity. Those are pretty tight restraints. A writer like Francisco Goldman can pen a heartfelt essay for the New Yorker, but even he must provide a certain amount of handholding for the casual reader. And of course he writes novels, too. I think I know why: there are things only fiction can accomplish. In Ernesto Sánchez I have a character who navigates the incongruences of modern Mexico, and the reader can (I hope) engage more deeply.

4. How have readers reacted to the book so far? Has the reaction been different in Mexico to in other countries?

The feedback has been incredibly positive. The gringos, who are a sentimental lot, are drawn to Sánchez’s female German Shepherd, Bill Clinton, and the wise old innocent Don Celestino, who is the Mezcalero. A lot of gringos, mostly men, like the depth of contextual information about the cartels on the Pacific coast. For Mexican readers, the notion of a trans man being a ‘guy’s guy’ is perfectly plausible – Mexico is a more open and tolerant society than many realize. But other readers – and this is a fair critique, even of a crime novel – found it a little grim. There is plenty of humor in this book (even my mother laughed in parts); still, the truth is that Sánchez gets a lot of shit done by strong-arm tactics, bribes, or trickery. There are good people in this story, but the message is clear: Mexico is rigged, and the fix is in. That’s not everyone’s idea of a beach read. Still, what has pleased me immensely is that readers of all stripes have been drawn to the characters, and to the writing itself.

5. How has living in Mexico and Latin America changed you as a person and as a writer?

I first came to Mexico thirty years ago (I’m 54). I kept coming back for longer periods of time. It has changed me, I think, by making me more cautious in my opinions (not an easy thing), while also providing access to a rich aesthetic. Like a lot of students of literature, I was turned on to the LatAm Boom, and wanted to know the places that engendered that creative output. Right away, Mexico blew my mind. I was both relaxed and stimulated – like a constant opioid high without the headaches and the constipation. As we know, Roberto Bolaño, who was Chilean and spent most of his adult life in Spain, fed on Mexico, and particularly Mexico City, for inspiration. It feels almost like cheating (and, yes, gringo privilege is a factor, particularly in the context of “self-exile”) but Mexico stimulates me almost on a biological level. How could this place not inspire a person to write? In Mexico I feel that I can push some narrative boundaries that would be taboo in Canada, where the heroes tend to be good citizens, and the anti-hero is, at best, an eccentric.

6. What do you feel is the strongest marker of your own identity and how does this impact upon your creative process?

I am an anglophone Canadian. I don’t particularly want that as my strongest marker, but the begrudging honesty, and the resistance, are telling in themselves. To be Canadian is a funny thing, because we are mostly a country of immigrants, and who were are is in flux. That includes coming to terms with the devastation we have visited on First Nations people, a growing population that is pumping out some of Canada’s most exciting art and literature. But it is also true that being Canadian can be liberating. I pled no allegiance to any flag. I have no interest in reclaiming mythologies, and I have no attachment to any monoculture. If my grandchildren speak Chinese as a first language, that’s fine by me. It is taking that fluidity, and dropping it in Mexico, that has liberated me creatively. So, there is something optimistic – even futuristic – in that. Nonetheless, I also feel a degree of cultural alienation from my homeland. There is an unctuousness to many Canadians, something that is embodied too well by our young Prime Minister, Justin Trudeau. It’s toxic, and a little nauseating – a smugness that, at times, even filters into our literature.

7. Do you believe that writing and literature can ‘make a difference’? Or does it have another role?

Yes, of course, but you can’t write with that in mind. I am okay with writing as entertainment, and I love inventive, smart prose in the service of a dynamic narrative, but I am suspicious of fiction as an intellectual or pedagogical pursuit. My own bias is toward characters that are morally complex. For me, if literature has a role, it’s to expand a reader’s understanding of, and connection to, characters that might otherwise be inaccessible. In real life, people can be incredibly intolerant. Literature can change that.

I have five novels in the Detective Sánchez series mapped out. That will keep me busy for the next decade. To pay the rent and keep myself in tacos al pastor, I will continue to churn out journalism and commercial writing. One thing that I am excited about is my blog at La politica es la politica, which I hope to expand to include interviews with writers, artists, and activists in Mexico City. And I also have a lengthy experimental narrative that I am tinkering with. It is immense and perhaps an over-reach, but it won’t let me be.